An update on pinging services + Glitch

@jenn, have Glitch considered moving away from AWS? Considered cheaper services? I’m not protesting or anything, I’m just curious.

I haven’t really had my ear to the ground on infrastructure discussions at the cloud resource level, honestly. But having moved from one service to another at a previous job, it’s not a simple or cheap task!

The company I’m working for moved from AWS to self-hosted (we bought a bunch of servers and stuff and set it up in Germany, that was fun). If it wasn’t for the flight tickets, hotel rooms and transport we’d nearly not pay anything. We have co-location with Contabo. Moving all of our services was just a bit time consuming, but not really expensive.

I’m sorry, but I don’t really see how moving from AWS to another hosting provider will be all that expensive? Can you clarify?

@ihack2712 i count time and resources as part of the expense!

I haven’t really had my ear to the ground on infrastructure discussions at the cloud resource level, honestly. But having moved from one service to another at a previous job, it’s not a simple or cheap task! 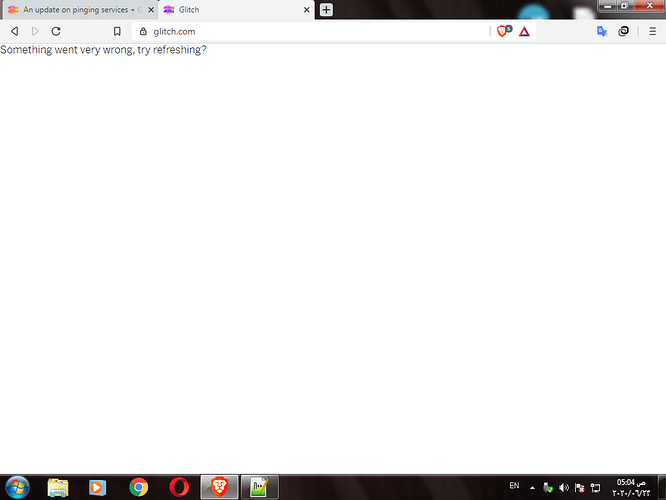 Well I am moving my bot on my phone to host it 24/7 there. At least I won’t have any limits except my phone’s limits. I used Glitch since it is easy and fast to deploy, but since bot will go offline after 5 minutes I can’t host on glitch anymore. I can think of developing program to do remote change deployment easy and fast. I will host only websites but besides that for example like bots, I will need to self-host.

I think this can be a good thing for Glitch! I was actually planning to move my bot away from glitch and just have a test version hosted here.

with everyone doing that, it drains a lot of resources

I understand the decision and I’m completely fine with it. Glitch isn’t a platform to host stuff 24/7. It’s a community where you can share your projects, work on them or test them. Personally I’m okay with waiting for projects to start up (if they no longer get stuck), because hey - it’s free!

Hi! I am very happy to hear that pinging services are banned. But reading the original post and some parts of the discussion, I am confused about why would someone even need pinging services if the projects are awake? Am I getting something wrong?

I’ve been using Glitch for a couple of years now, pretty much since it got the Glitch name (after Gomix + Hyperdev) for little experiments and mostly to teach other people to code. I absolutely love the product and the team.

Recently it was frustrating to recommend Glitch to people to make their first HTML site only for it to be flaky/down, but it turns out this was all because a chunk of users were abusing a free system to make always-on bots.

For anyone who didn’t already “get it” from the great replies by Cloud, r0ss, and others, this is something called the tragedy of the commons.

If you have paying users but others are getting the primary paid benefit (always on) by using a hack, then why pay? It becomes impossible to create a paying user base that will sustain the service for everyone.

As it happens, I probably won’t pay for Glitch, but you have to recognise that the people who pay need to have a reason to do so, and Glitch needs to earn more than free-user goodwill - it needs revenue.

So I’m personally glad about the ban and I hope that this opens a new prosperous era of committed paid users and frugal, satisfied free-users like myself.

Kind of have to agree with @itsyanko.

Cloud computing is very expensive. Lets say that Glitch has 2000 projects running and online at any one time, (which is a lot, but its possible). Lets also say that 50 containers can fit into one VM. According to the AWS Pricing Calculator, this would set you back around 30,000 dollars per month. That also isn’t including the s3 Glitch probably uses for cdn.glitch.com. 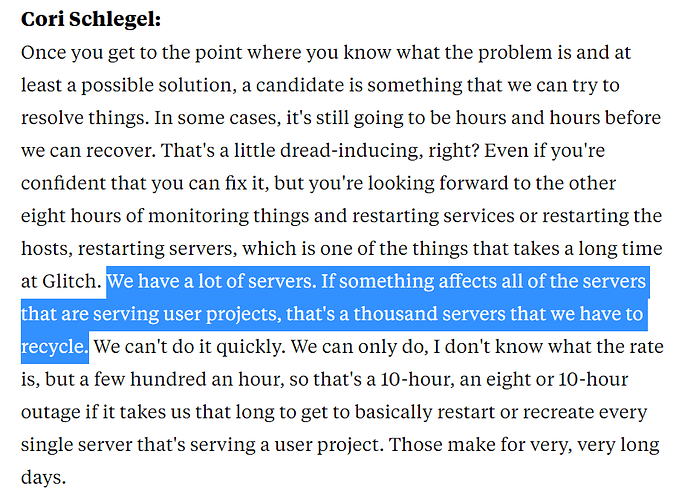 I absolutely understand the reasoning behind this and think it’s the right move, but I can’t help but feel like this is something that could have been communicated via email.

I went out of my way to confirm that I WAS allowed to keep my app alive according to the documented limits before I built anything. Now that page 404’s and today when I needed to use one of my apps they were failed without explanation.

Googling glitch + “limits” or “restrictions” or “keep alive” don’t bring up this announcement so the only way I figured out the problem was complaining to friends.

If I’d gotten an email saying my apps were going to fail I’d have just upgraded to a pro plan and been happy to do it. Now I’ll almost certainly upgrade, but grudgingly so, and with a lot of concern that I can’t treat Glitch as dependable for anything other than toys.

Hi @drldcsta!
Welcome to the Glitch community! I agree this could have been delivered via email for people who are not members of the forum. Also, that restrictions article comes up as 404 Not Found as recently Glitch moved to the new Happyfox Help Centre. Here’s the new link: https://glitch.com/help/kb/article/17-what-are-the-technical-restrictions-for-glitch-projects/ (btw @glitch_support it looks really good! Much better! But the return to home on the 404 Not Found page takes you to /home (the homepage of Happyfox) and not glitch.com or glitch.com/help)

Basically what happened here was, “Hey we have a new service that provides free french fries, it’s open for all in the mall’s parking lot” and it was a great service, plenty of fries, all day, all night, everyone loves the fries. And then eventually the service went “Why are there so many seagulls here???” and they’re putting up nets on top of the parking lot in order to stop the seagulls.

In this analogy, Discord Bots are the seagulls

Could there be a sys where if user1 clicks some button allowing others to use their servers then user2 pings and based on servers available you could return successful ping or not successful ping? All my apps don’t need to stay awake 24/7