There’s a new blog post out about how Glitch made that colorful header on their homepage.

This Was Too Big to Fit in Our Newsletter: How We Got Rainbows on the Homepage

From idea to code in seconds, build and learn alongside the most creative coders on the Web

I’ve long wondered why there is sort of a color border on the links.

Enlarged view of “WebXR” link, rendered in Firefox on Windows.

Now that there’s a blog post about it out, it’s finally clear. It’s because you’re looking at this

on top of this

on top of this

The pixels at the periphery of the text are partially inside the text and partially outside. The renderer knows as much as:

The purple and yellow actually cover the same part, but the renderers in browsers don’t know that. So it ends up drawing a pixel that’s combination of all three, even though there ought to be no purple. I wrote an article about this once.

What would be good is if we could have the purple layer not draw the text corresponding to those links, then the browser would only have to blend light blue and yellow.

But the text also kiiinda needs to be there, so that the text layout remains the same.

A modified version of the header with the linked words simply removed from the gradient layer.

No problem, right? Invisible text is how they make the colored links layer line up. They just set the text color to transparent.

Styling used in the colored links layer. More CSS makes the links have color other than transparent.

Styling of the gradient layer. I’m guessing they use -webkit-text-fill-color instead of color so that a reasonable color can be set for graceful degradation.

What turns out to be just right is visibility: hidden. As MDN describes it,

The visibility CSS property shows or hides an element without changing the layout of a document. The property can also hide rows or columns in a .

The visibility CSS property shows or hides an element without changing the layout of a document.

Enlarged view of “WebXR” link, rendered in Firefox on Windows. 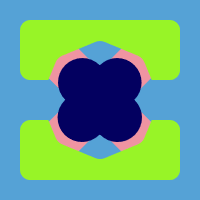 A step by step look at making a gradient header with pretty colored links. Lisa Frank has a posse.

nice catch, to be honest i never even noticed the color fringes but i also don’t wear my glasses at the computer. i’ve passed this on to jesse to check out!

photographic evidence that jenn uses a macbook pro with retina display, such high dpi displays having lower proportion of pixels on the boundary of text, so that the effect is less noticeable

Respectfully, I do not want my face posted on here so I redacted the photo - but good eye on the Macbook Pro! It is definitely much less noticeable, those pixels, but they are definitely there!