What happened to Glitch's "Ask For Help" feature?

Remember that thing? It was something Glitch had and was one of it’s unique features. Today, when going to the editor and inviting someone to edit, that button no longer appears!

I agree! But anyway, does anyone knows what happened to it?

This was one of my favorite Glitch features and I was heartbroken we had to deprecate it, but it was getting very difficult to keep it working whilst making all the editor changes the team was making at that time. I would personally love to bring it back again, though!

I’d also love to know how y’all would like the feature to work and look like were we to reimagine and reintroduce it to the community!

the requests for help were only shown on the glitch home page, which I spent very little time on

I think javaarchive has a good point about the lack of discussion. you can’t receive help without giving edit access because they can’t even type something to you

But hey we could take a bit of inspiration from google, since Anil or someone described glitch as very similar to google docs, perhaps we could embed the support forum in some way into the editor (except try to discourage it on mobile since there’s like no space). Discourse should be able to automatically adapt to the resolution of the iframe, besides this one kink where it tries so hard to split the postbox in half so it can display the preview 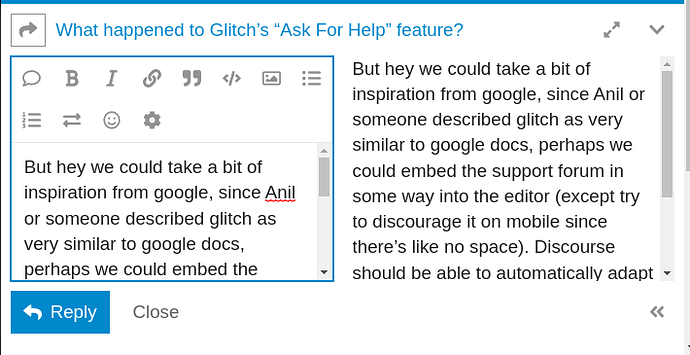 But that’s google, and people do joke about how google has too many apps that can be used for chatting